The popularity of breast augmentation procedures is evident worldwide. It remains the most common or within the top three most requested cosmetic operations today, depending on geographic location. Decreased demand is often associated with media inspired hysteria or populist scandals of the time (The PIP debacle being one such). Despite this, augmentation has enhanced the lives by improving self image and confidence of between five and ten million women worldwide.

The June 2011 FDA update noted that in 2010 in the USA alone, 296 203 breast augmentations and 93 083 breast reconstructions where performed, of which about a half where silicone filled and a half where saline.

Silicon is the most abundant element on earth. Silicone is a broad term encompassing the many useable forms, or polymers, of the Silicon/Oxygen combination. There are as many polymers of silicone as there are polymers for the Carbon equivalent, oil. Similar to oil, not all silicone polymers are safe for human use. For example, olive oil is great on salads, whilst gearbox oil won’t do!

The principal formulation employed in the over one thousand medical uses of silicone is dimethylsiloxane. Medical grade silicone is one of the least bioreactive materials available for medical usage today. Despite all polymers having varying chain lengths after manufacture, the longer the average chain length, the more bonds, the more viscous (thicker) the formulation. Both silicone and saline prosthetic shells are elastomers made of vulcanised (cured) cross-linked silicone rubber. The modern shell has six to seven layers that form a smooth or irregular (textured) surface. These are therefore similar to either smooth slicks for racing cars, or deep tread found on off-road vehicle tyres.

The main controversy today revolves around the filler material to be placed inside these shells. The traditional soft semi-fluid silicone has either been replaced by saline or become more jelly-like and come to be known as cohesive gel. Obviously, an entirely cohesive prosthesis does exist, and is safe as regards any leakage should the shell be damaged. The drawback is that the resultant firmness precludes a soft, natural feeling breast. An acceptable compromise between these two opposing ideals must be sought and is ideally individualised to each patient seated before the cosmetic surgeon involved. At times, the compromise of firmness is accepted in order to maintain the anatomic shape of a “teardrop” prosthesis, particularly under adverse tissue conditions such as reconstructions with less than perfect overlying cover.

Due to the sticky mess that may result from a ruptured shell around silicone filler prostheses, as well as the less than natural feel of a saline prosthesis, improved filler materials are constantly being sought. After initial great promise, all have proven to be either disappointing or downright noxious, and have been consigned to history. The two remaining fillers are therefore still medical grade silicone gel and physiological saline, with the former still an attractive target for oft hysterical social pressure groups, the media, and financially motivated legal interests.

Physiological saline is salt water at the same concentration as normal body fluids, which explains the great attraction of saline’s entirely safe absorption by the body upon leakage of saline through the shell of an implanted prosthesis.

A brief history of prostheses

There are a few varied and distinct histories as regards the evolution of breast prostheses and breast augmentation. Firstly, the media and courtroom led turmoil so evident in North America at the end of the last century resulted in much fear and hysteria, as well as fortunes made, at the expense of reasonable research-based progress in safety. A distinction must therefore be made between American populist fuelled silicone filler restrictions and worldwide continued progress in gel prosthetics as evidenced by successive manufactured generations. Since the era of off-the-shelf prostheses which began in 1963, the halcyon days of the sixties and early seventies where tempered by hardening of scar found internally around the implant. Known in medical circles as a capsule and given a grading score according to its severity, some capsules where found around ruptured prostheses. Unknown was which caused which, and etiology or cause of either. As these complications where revealed, the very real improvements in manufacture during the sixties where negated in the seventies by erroneously attributing this firmness to the viscosity of the filling silicone and the thickness of the polymer shell. These second generation prostheses had both thinner shells and filler materials termed “responsive”, and disaster resulted. These thinner implants where all to rupture or leak given enough time, though the rupture was not always noticed as many where asymptomatic. The eighties brought third generation prostheses with thicker, tougher shells and thicker filler silicone massively improving outcomes. We presently have access to fifth generation prostheses with cohesive filler gels and chemically modified shells significantly reducing ruptures and eliminating the slow diffusion that is known as silicone bleed. Despite this obvious progress in malfunction reduction, The FDA reclassified implants from Class II devices to Class III devices in 1988 based on reports of adverse outcomes. This placed prostheses in a higher risk category, with the FDA calling on manufacturers to provide the information from trials that was required for premarket approval. Controversially in January 1992, a voluntary moratorium on sales was announced whilst they reviewed the available data. In April 1992 the FDA concluded that they had insufficient data. Silicone filled prostheses could only be used for breast reconstruction, revisions of existing silicone implants, or for correction of congenital defects such as Amazon or Poland’s syndrome. These would form part of ongoing studies, and was “in order to meet a public health need”. This would seem to be a contradiction considering the withdrawal from the market until safety was established by research. By the same token, saline filled prostheses where yet to be declared safe by similar approved research, but where never removed from the American market. Fortunately, worldwide sales and progress continued unabated. Research results perused in 1999 by the Institute of Medicine (IOM) acknowledged local complications but cleared silicone prostheses of all systemic health effects. Further evaluation resulted in the approval in November 2006 for sale on the open North American market of silicone prostheses for two manufacturers by the FDA. A third has been approved in 2012. Of interest is that one of these two provided 602 silicone filled prostheses for primary and revision augmentations in the USA during this core study. During the same period the same manufacturer provided 379 000 similar prostheses worldwide. Worldwide research on all matters augmentation had also continued unabated. The approval by the FDA was dependant on six new studies per manufacturer as a follow on to the initial core studies. This clearly positions augmentation mammaplasty as the most studied medical procedure and prostheses as the most researched device in surgical history by some margin.

The principle advantage of silicone fill is the natural feel and shape without wave-like cosmetic disturbance that occurs with under filled saline prosthetics. It has a consistency similar to the fat found in the natural breast, with higher cohesion tending towards firmer breast glandular tissue. Unless a shell perforation occurs, size is maintained. Because of the scar layer of varying thickness that always forms around any implant, many of the older generation ruptured silicone prostheses maintain size and were not discovered except by special investigations or incidentally at replacement for other reasons. These are the so-called intracapsular ruptures and still fuel debate as to the necessity for routine removal of these asymptomatic ruptures or not. Full cohesive silicone anatomic implants maintain their teardrop shape, at the cost of very firm breasts.

The main disadvantage of silicone filled breast implants is all the complications occurring around ruptured shells with leakage of liquid silicone. If this escapes the capsule, a tacky mess ensues, with any compressive force forcing liquid silicone into available spaces. Lumps known as siliconomas or granulomas may form, and can prove challenging and messy to remove and are often confused with masses more sinister. Though most ruptures are intracapsular and relatively easy to remove by including the capsule, debate still continues as to whether leaked silicone causes hardened capsules, or whether constricting capsule causes the shell rupture and subsequent leak. The former would appear unlikely as saline filled prostheses also develop capsules. Some microscopic silicone is engulfed by Macrophages, and this can be carried to draining lymph nodes. This causes no symptoms and has never spread to other areas of the body. It certainly doesn’t spread to breast milk, with the silicone lining milk cartons causing higher systemic levels once the child can tolerate cow’s milk. The gradual leak or “bleed” that was always noted in first and second generation prostheses has been eradicated by bonding Phenyl or Triflouropropyl to shells which imparts a slightly negative charge. Obviously, silicone prostheses are pre-filled and require a longer cut than the empty saline shells for placement. This averages a centimetre longer. Conversely, there is less chance of leakage from faulty valves. Silicone filled implants appear to have slightly higher capsular contraction rate than saline filled. 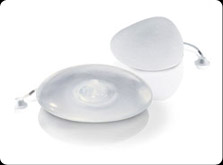 Saline has no local side effects on leakage from the prosthesis and is absorbed entirely by the body. This is significant despite the overall low leak rate of current generation silicone containing prostheses compared to the gradual deflation found with saline. This gradual deflation is noted as both a size reduction, as well as under filling of the prosthetic shell. The fluid sloshes about during movement with visible rippling and many patients are advised by their implanting surgeon as to the need for replacement in about five years with accompanied financial implications.

As saline implants are filled once they have been implanted, a smaller incision is usual, and distant site such as the umbilicus can be used as access through the skin. The obvious counter argument is the added internal scarring to reach the breast as well as added surgical duration. Many would happily accept this compromise to keep scarring away from the breast. Within the limitations of under-filling with saline slosh or over-filling and thus the voiding of the manufacturer’s warranties, varied fill volumes can be used to compensate for pre-existing differences in breast size. A non quantifiable advantage must always be the safety of leaked saline with the ensuing peace of mind never to be under-estimated with respect to perceived cosmetic outcome.

The decision as to filler must remain a collaboration between surgeon and patient. The vast majority of implantations in Europe, Australasia, Southern Africa and South America are silicone filled for a natural feel and appearance. American trends obviously vary with era examined, but at present are roughly divided in half. The FDA, whilst recognising the possible local complications and adverse outcomes of silicone “determined that the benefits and risks of breast implants are sufficiently well understood for woman to make informed decisions about their use”. This places the onus on any responsible surgeon to honestly inform augmentation candidates with understandable, current information. With the wealth of interest in all forms of media, particularly the electronic form, it behoves any prospective patient to approach a surgeon with a readily available background of understanding and be part of the decision making. Initial co-planning should result in an excellent outcome.

To end, I include a quote from Garry S. Brody.

“A shapely bosom is sexy and attractive if it is natural, but somehow frivolous and vain if sought through surgery. Thus, in contrast to the common cliché, most of these women seek augmentation despite, rather than because of, social pressures.”